RYKY Mission founded by Acharya Dr Sudhin Ray in the year 2010 as per wishes of his revered Gurudev Shri Shri Maheswari Prasad Dubeyji of Kriya Yoga Lineage [emanating from Babaji Maharaj and passing to Lahiri Mahasay to Pandit Panchanan Bhattacharya to Netai Charan Bandyopadhyay to Maheswari Prasad Dubey to Sudhin Ray] has the single pointed objective of helping man in self realisation or self knowledge for which the practice of Kriya Yoga techniques as propounded by Yogiraj Shyama Charan Lahiri Mahasay have found to been the most effective and the role of this mission therefore is to hand over/transmit such original kriya yoga techniques to the deserving inquisitive seekers and thereafter guide them to self realisation/self knowledge.

Regarding the single pointed objective of self realisation by man Acharya Dr Sudhin Ray emphasizes that knowing the self is of paramount importance as without knowledge of the self man can never know love, which is his true nature being the supreme intelligence. What he knows as love is not actually love because then hatred, jealousy, competition and all sorts of violence in latent or express form shall find no place in his life and he will ever be sat-chit-ananda blossoming with joy and living in complete harmony with all creations of Mother Earth.

In this respect the following doha of Sant Kabir Das is noteworthy:

The mission has its registered office on the 4th Floor of Ramakrishna Apartment located at Dargatala Ghat Lane, Bhadrakali, Uttarpara, Hooghly in the State of West Bengal and unlike other missions is very simple and least superfluous. All the disciples here are mostly householders and come from all walks of life who are adored by revered Gurudev and Gurumaa as their own children. 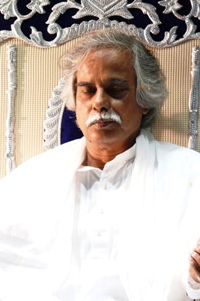 Dr Sudhin Ray was born in a devout Bengali Brahmin family in Kolkata to Late Akshay Mohan Ray and Late Kamala Ray on the 20th of August 1949. His early childhood days were spent in Beadon Street and Kankurgachi areas of Kolkata and later on he settled down in Uttarpara in the Hooghly district of West Bengal. His forefathers belonged to Barindra Brahmins clan of Kannauj, the ancient city, now in the state of Uttar Pradesh. Some of those ancestors from Kannauj had gone to Mymensingh (now in Bangladesh) wherefrom one of his forefathers settled down in Kolkata.

Dr Sudhin Ray obtained his Doctorate in Bio-Chemistry from the University of Calcutta in the year 1979 and thereafter served as a scientist in various scientific and academic establishments. In the later years he joined as Scientist at SSKM Hospital, Kolkata where he rendered service till the date of his retirement in 2009. He is a householder and a proud father of two lovely daughters who are happily married. His wife, a pious lady, is the adorable Gurumaa of all kriyabans of RYKY Mission. Dr Sudhin Ray is well accomplished in sarod playing as well as painting.

Since his early childhood days Dr Sudhin Ray was a Shiva devotee and unlike other children of his age was very much skeptical and inquisitive. His inquisitiveness into the fathomless paved the way for his initiation into Kriya Yoga in the year 1992 by Shri Maheshwari Prasad Dubeyji who later on realizing the potential of his disciple ordered him to take forward the Kriya Yoga lineage in the largest interest of mankind. Presently Gurudev Dr Sudhin Ray is carrying out the orders of his revered Gurudev initiating deserving seekers into Kriya Yoga since 2000 for which he has laid the foundation of RYKY Mission.

Dr Sudhin Ray has authored some books in Bengali like Kriyayoga Prosange Alochana (Vol I to IV), Adhyatmikta, Kriyayoga Aar Atmabodh while few are in the pipeline. Also the translation of Gurudev’s works in English and Hindi are being done by some of his disciples. One such disciple Shri Shiv Kumar Jha has brilliantly translated into Hindi the Bengali version of Adhyatmikta, Kriyayoga Aar Atmabodh under the title Adhyatmikta, Kriyayoga Avom Atmabodh. All the books including the book Kriya Yoga Rahasya in Hindi authored by Shri Maheshwari Prasad Dubey as well as its translated version in Bengali are available at the registered office of Raj Yoga Kriya Yoga Mission against nominal prices.

The Ninth Digital Edition (July 2022) of our Ashram's mouthpiece - 'Anweshan' is now available to all readers.