This Article was Published in the Fourth Digital Edition of Anweshan 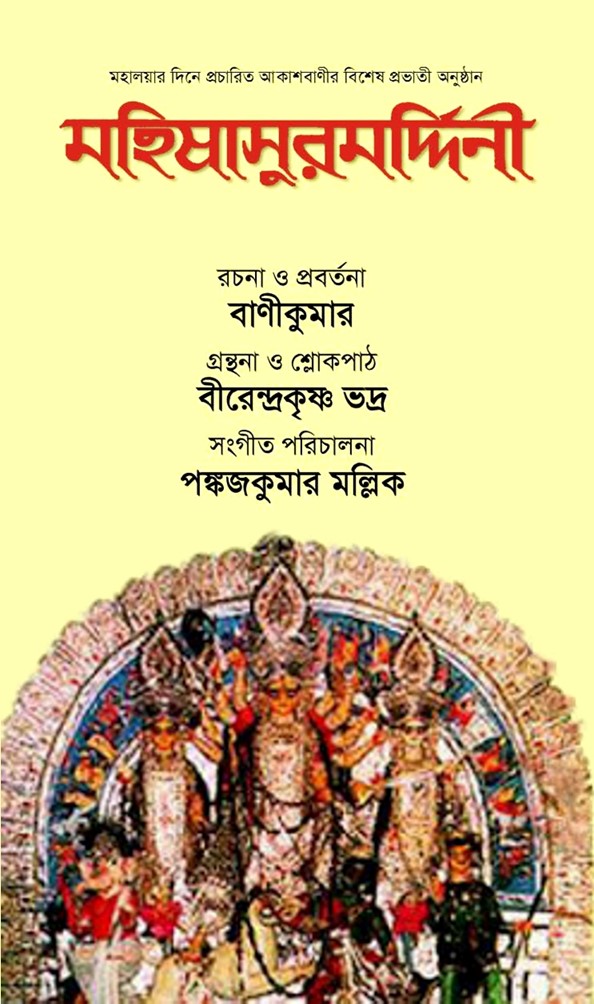 With the auspicious day of Mahalaya marking the beginning of Devi Paksha, each devout mind plunges into the mood of devotion and worship of the Mother. The mood sets in on listening to the legendary “Mahishasuramardini” in the great voices of Bengal broadcasted over the radio every year on the eve of Mahalaya. With the iconic voice of Birendra Krishna Bhadra, the music of Pankaj Kumar Mullick, and scriptwriting by Bani Kumar, this programme has come to occupy a very special place in the heart of every Bengali and all residents of West Bengal. With the ‘Agomoni’, which is celebration on the advent of Devi Durga, the festive mood gets set in on full swing. While people of today’s generation have several other options than radio for entertainment, many wonders as to why even today this programme feels the same refreshing as it has been for several decades ago and has not faded yet from the minds of people. This programme is an iconic composition in its own. Some of the factors that have contributed in its fame making it thus relevant till date are discussed below.

The very first thing about the musical composition is of course the unconventional yet extensive use of Raag Malkauns among other ragas. Being a mid-night Raga, nobody could have thought of using it at ‘Brahmamuhurta’. As the first sound of the conch shell starts fading away, a short tune is heard in Malkauns, followed by the beginning of the invocation of the Goddess- ‘Ya Chandi…….’. It may be noticed that from the very beginning and as the programme proceeds, there is extensive use of Malkauns. It was the pure genius of Pankaj Kumar Mullick to set the composition in this raga. The reason is that Malkosh is not only a midnight raga but also a meditative one. It has in it the quality to transcend both the singer (player) and listener to a highly meditative state. This author came to know about an incident from a Kriyaban in Shri Bhupendranath Sanyalji’s lineage that can be cited as a good example in this context. A friend of this kriyaban, an accomplished classical singer, in her daily practicing sessions of Malkauns used to see sometimes vivid visions of while brilliant light upon closing her eyes. She was not a kriyaban and therefore naturally confused while simultaneously joyful at this. This illustrates the Raaga’s natural potency to elevate one to a sublime level of consciousness.

The Arohana and Avarohana i.e, the ascending and descending structure of Malkauns is such that it can describe or bring out the effect of advent or descent of divine consciousnesses. This effect is also found to a great extent in Tagore’s ‘Anondodhara bohiche bhubone’ which almost directly describes the feeling. Here this same effect makes one aware of the descent of Divine consciousness and the advent of Mother with the beginning of Devi Paksha. This creates the desired effect upon the listeners as they become ready to immerse into the ocean of divine bliss.

The raag is based on the Bhairavi thaat so that there is a feeling of ‘awakening’ in it. With the listeners just up from their beds and the mood of Nature ready to awake with the sunrise, the first tune of the radio sends a message for ‘inner awakening’- ‘Arise for the Mother’s worship, here she comes!’ A good example of this feeling can be found in Nazrul’s ‘Shoshane jagiche Shyama’. As the programme continues Raga Bhairavi is gradually employed to strengthen this effect.

Apart from this, the ragas are used all over the programme in such a way that one can easily relate to the Nature’s mood. It is also worth noticing that the very first part of the narration by Birendra Krishna Bhadra begins with a description of the Nature and does not have any part of Chandi shlokas. This makes the listener more aware of the Nature and for relating to the mood of ‘Agomoni’. Till date the songs ‘Ya Chandi’ (Malkauns, Jhaptaal), ‘Ogo Amar Agomoni’ (Malkauns, Rupak taal), ‘Singhasta Sashisekhara’ (Bhairavi, Kaharwa), ‘Bajlo Tomar Aalor Benu’ (Bhairavi, Dadra), ‘Jaago Tumi Jaago’ (Bhairavi, Kaharwa), ‘Taba Achintya’ (Bibhas Raag; based on Bhairav thaat, Teental), ‘Akhilo Bimane’ (Desi Todi, Jat taal) etc. stand amongst some of the best songs based on ‘Agomoni’.

The technique of repetition is also employed here that many modern composers and music directors do. The continuous use of a tune from the very beginning helps to establish that effect permanently into the mind of the listener. The human mind relates music to a particular thought and every time the tune is heard, the mind gets instantly captivated with the ideas associated with it. This explains why the radio programme has become synonymous with the occasion of ‘Mahalaya’. This effect is known to the practitioners of classical music. The ragas are sung or played based on the main/basic structure with improvisation and other elements being added to create variation. However, these are connected with the same tune and thought. It can be seen here that in between songs and the shloka rendition, extension of each part is done to maintain the continuity of thought and tune and there is no ‘snap’ in between this transition. The ascent and descent of notes in the rendition of shlokas by Birendra Krishna Bhadra is done smoothly creating a wave like effect.

It was also the exceptional creativity of Shri Baidyanath Bhattacharya, popularly known by his pen name Bani Kumar, to make such a script incorporating shlokas and principal ‘angas’ from the Chandi without making it uninteresting and hard to comprehend by common people. The events are laid out as described in the book with shlokas used in proper places. Since the same tone and scale is maintained for the songs, Sanskrit shlokas and narration parts, there is an easy flow of thoughts within the listener’s mind.

Then again there is also this splendid portrayal of the dramatic events described in Chandi, the two most prominent being the materialization of Devi Durga by the collective energies of Devas and of course the war between Durga and Mahishasura. In the part describing the war, background effects resemble a storm and disruption amidst the phenomenal recital by Bhadra as Devi slays the demon.

With all these elements in place, it is finally the radically distinctive voice of Shri Birendra Krishna Bhadra, heard since 1931 (recorded in 1966), that has the natural appeal due to his devotion, unparalleled dedication, and unmatched quality. ‘Mahishasuramardini’ remains the oldest broadcasting on Indian radio till date. It remains relevant till date as the most legendary programmes in the history of mass communication media. Generations have grown up listening to the tune of this programme every year in the pre dawn hours of Mahalaya, marking the onset of Durga Puja. And generations yet to come shall keep rising every year on this auspicious day of Mahalaya at 4 a.m. to plunge into the divine bliss of joy and devotion.

2 Replies to “Behind the relevance of ‘Mahishasuramardini’: A Review”