On 6th January 2019, Raj Yoga Kriya Yoga Mission celebrated the 83rd birth Anniversary of Param Guru Shri Maheshwari Prasad Dubey Ji. According to the Gregorian calendar, the actual birthdate is 4th January, though mission celebrates this day on Sunday which falls near to actual date so that all devotees can come and receive the grace of Param Guru.

The event started with lighting a lamp before the image of Param Guru Dubey Ji. Our Gurudev lead the ceremony along with guests. After this all ashram devotees offered flowers on Dubey Baba’s image.

The next program was the recitation of the Vishnu Sahasranama from the Anushasana Parva of the Mahabharata. This musical presentation of 1,000 names of Lord Vishnu was curated by Dr. Oindri Ray, along with the other female devotees of the mission. With the Vedic chant, the entire auditorium reverberated, and the surrounding was infused by the energy. Dr. Ray also explained how Vishnu Sahasranama could help you achieve calmness and help you to concentrate during Kriya. 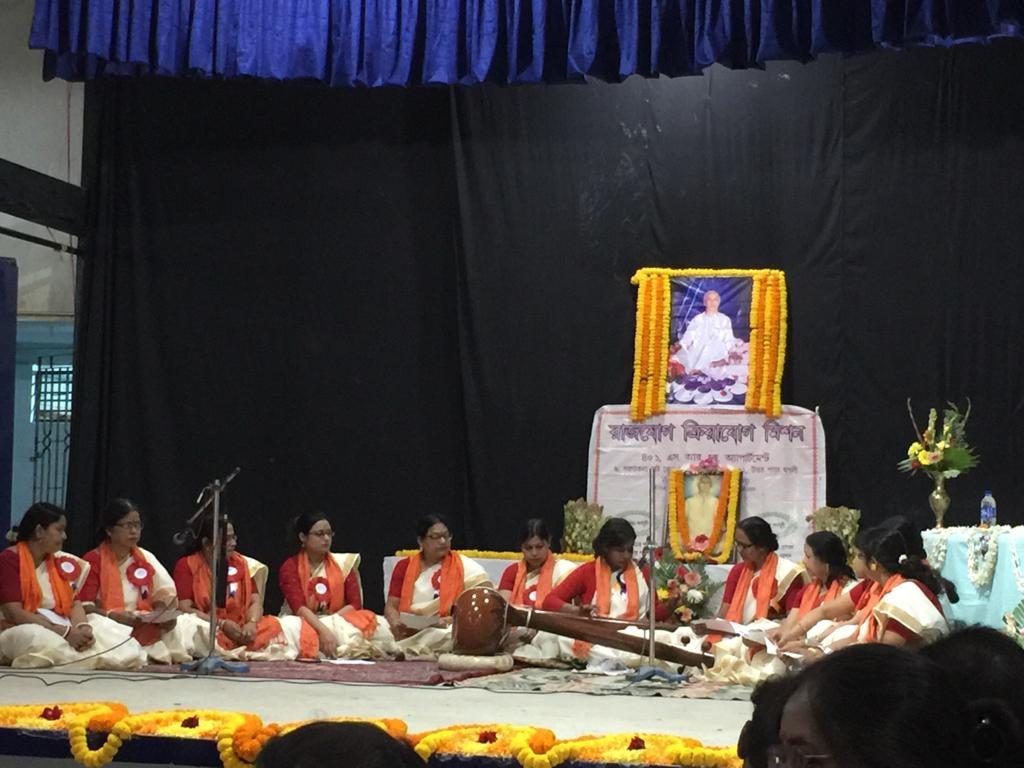 Then came the most awaited juncture of the event –  the experiences of the direct disciples of Param Guru.

Our first speaker was Dr. H.N. Bhaduri. Dr. Bhaduri is a cancer specialist and one of the foremost disciples of Dubey Ji, who got initiated in Kriya during 1980’s. Dr. Bhaduri remembered Dubey Ji in these words – “ Gurudev always used to say, “Don’t waste a day without doing Kriya. Do your Kriya faithfully everyday and you will achieve everything which is meant for you”. I did as he said and am still following his commands. I had an ailing father and mother at home to whom I needed to nurse every night. Being a doctor and son, it was my duty to serve them, but my Guru’s command was also important. So, after finishing my duties at night, I sat for Kriya Meditation around 3 A.M., I’m following this timing till today. I had seen many people complaining to Gurudev regarding their inability of doing Kriya, due to lack of isolation at home. Dubeji said “ Do you have space in bathroom? Sit at any corner there, and do your Kriya. Do not give me excuses. “

Dr. Bhaduri further said – “Dubeyji told me, I have chosen Sudhin to carry out my work when I will be gone. I will not give you this responsibility because your profession needs more sincerity towards your patients.  Sudhin is a man of unlimited capacity. He can take care of the Kriya Initiation responsibility, and bring thousands of seekers to Kriya.”

The entire auditorium reverberated with an applause, when Dr. Bhaduri finished his speech.Indeed his words were gems, and we were so fortunate to listen to him in person.

Our next speaker was Manas Chudhury. He got Kriya Initiation from Dubey Ji during mid-nineties. Manas Ji said, ”When I was initiated, I was not hundred percent convinced about the benefits of Kriya. You can say I was more of an atheist at that time. But when I sincerely started my practice, a new world opened to me. Experiences during Kriya cleared all my doubts, and I am grateful today that Dubey Ji chose me as one of his disciples.”.

Dr.Prosenjit’s experience was quite unique and it is worth sharing. Dr. X said, “ I was associated with Kriya from some time, but somewhere during 2009, I suffered from severe headache and an uneasy experience beyond control. The situation was so severe that if I ever saw any religious symbol, for example, the Ohm symbol written somewhere on a wall, the pain occurred  suddenly. Due to this situation, I stopped doing Kriya. By God’s grace I got the reference of Guruji, Dr. Sudhin Ray. When I met him, I explained that I was initiated in Kriya from another lineage, and ever since I’m practising Kriya, I am suffering from unbearable headache. Guruji took pity on me and initiated me to Kriya during the Guru Poornima of 2018. I later learned that I was not doing steps like NabhiKriya etc. Therefore, as a result of  the faulty method of practice, I was suffering. But after my initiation, I can tell you today that my pain is almost gone, and I am able to do my Kriyas regularly. It is my humble suggestion, do not try to do Kriya on your own, and do not choose your Guru haphazardly. Wrong Kriya practice can harm your body and mind without your knowledge. I am blessed to find Guruji.”

Dr. Oindri Ray shared an experience which is no less than a revelation. She is the first disciple of our Gurudev. Dr. Ray narrated that, Dubey Baba commanded Gurudev to carry on the initiation of Kriya Yoga. In Dr. Oindri Ray’s words – “Being the first disciple, I witnessed the whole process. Dubey Baba was holding Gurudev from behind, and Gurudev was touching my Kutastha. I saw both Gurudev and Dubey Baba vibrating at a high frequency. That scene cannot be described in words. Dubey baba asked me to close my eyes, and I got my initiation on that day.”

Kinkar Chaudhuri explained the process of scientific side of Kriya. He explained that our body has vagus nerve, which extends from the brain-stem down to our stomach and intestines, stretching to our heart and lungs, and connecting our throat and facial muscles. Kriya yoga practices stimulate these areas of the body and can have a profound influence on the tone of the vagus nerve. In order to ensure an efficient communication between the neurons and a faster propagation of nerve impulses, some neurons are endowed with an insulating sheath called ‘myelin’. The molecular process of the synthesis of the myelin sheath is called ‘myelination’. The main purpose of the myelin sheath is to increase the speed at which the electrical impulses propagate along the myelinated neuron to the next neighbouring neuron. Myelination helps prevent the electric current from randomly leaving the axon, thereby, permitting an agile communication for long-distance signalling, and to sustain such signals.” Kinkar further said, “When we perform Pranayam, a life force through the scientific breathing technique travels upwards and downwards. It stimulates our chakras, and the friction occuring during pranayama helps myelination.

Meanwhile our dear Mission member and senior Kriyaban Gopal Da was taking session on Kriya practice at the back stage. Gurudev instructed Gopla Da to clear the doubts of newly initiated Kriyabans and show them the correct techniques.

Then came the most important session when Gurudev held the microphone for the question answer session. Our beloved Gurubon, Lopa Mudra Saha, was assisting Gurudev with the questions. The most common question was how to do Kriya in busy life. Gurudev said, “When you are initiated in Kriya it means you have taken up the challenge, and promised to move ahead against all odds of life. It is no less than a battle. If you surrender to your senses, then the war is over. Always remember that this very question was raised by Arjuna in Kurukshetra. When Arjuna had his problem, we are but a common human being, and we also have to face the same question. As Arjuna followed Krishna and became victorious, we must also do Kriya everyday to win our daily battles.”

During this event 8th issue of Ashram Magazine “Anveshan” was also launched by Gurudev.

With Gurudev’s encouraging words, the event was concluded. The devotees took blessings of Gurudev and Guruma, and enjoyed the evening with savoury refreshments.