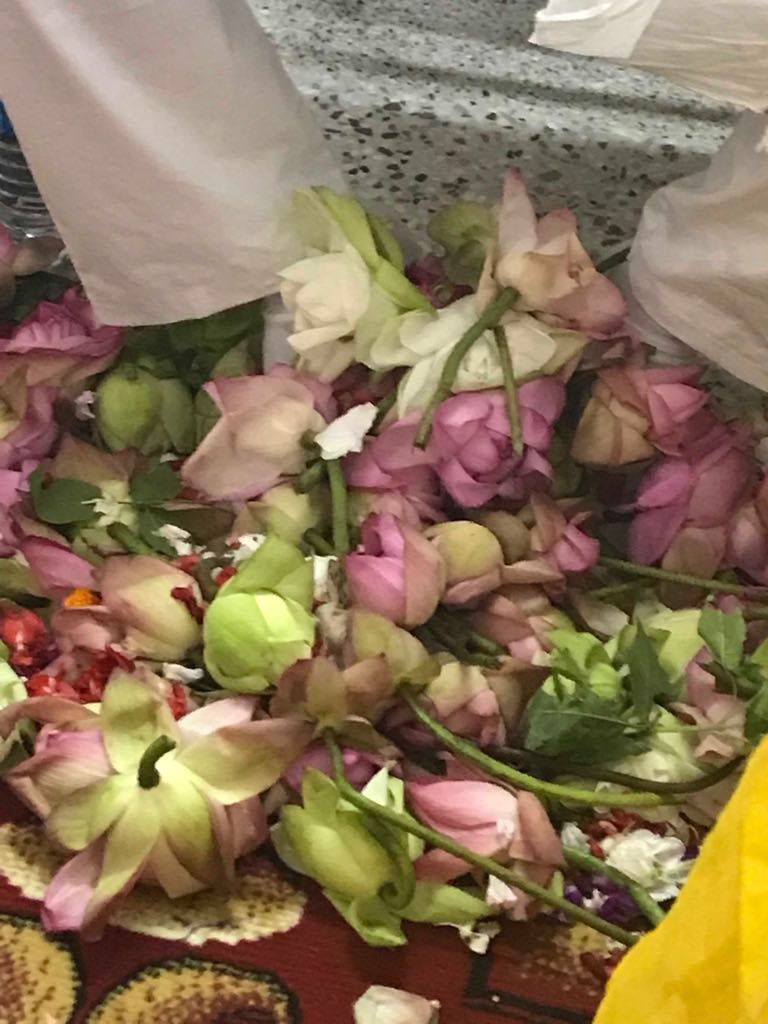 On the eve of Guru Purnima, this 27th day of July’2018, this writer has hardly anything to offer to his Guru except his deep love for him since the entire being of this writer as he is and all his worldly possessions acquired till date are that of his Guru’s and therefore surrendered at his holy feet!

Revered Gurudev having taken extreme pity on this writer had initiated him into Kriya Yoga on the 3rd day of July’2016 a desire that this writer had cherished since 2009 after falling in deep love/communion with Yogiraj Shyama Charan Lahiri Mahasay after viewing his world famous image and reading few available books on him. Since initiation this writer has regularly been visiting his Master either at his home or ashram for hearing Master’s holy words apart from sharing his own experiences.

Accordingly few excerpts of those holy words have been reproduced below as this writer’s humble offering to his Gurudev:

Always motivate everyone to realize his highest potential; never demean anyone for demeaning is very easy and extremely wicked; every man has the potential to realize the Truth; Truth that he as he exists is Pure Consciousness/Pure Joy/ Pure Love that unfortunately remains hidden by clouds of ignorance produced by his own false identifications/images, that is, ego.

Be wise; for wisdom and cleverness are not identical though now-a-days people are found to be clever but not wise; wisdom is realizing that you are the master of this body-mind that is physical body, astral body and mental body and never are all these three your master in either individual or collective capacity though at times you may have felt each one of them exercising its authority upon you; whereas cleverness is the art of getting one’s work done propelled by self-interest without knowing the self for whose interests the work is being done.

To have only the minimum ego required for holding this physical body for its existence/ survival and dropping all ego of the astral and mental bodies since all ego are false that arises out of false identifications/images that gathers around a man in due course of his upbringing by the society.

Never attempt at controlling anger, lust, greed, lethargy or envy for all methods of control are different forms of suppression which in turn is a form of tacit and latent violence that ultimately will do more harm than good to the individual; the only way to overcome these vices are by simply and directly not becoming angry, envious, greedy, lustful or lethargic- achievable only by deep observation of the said vices since their very inception; observation that is absolutely pure with no interference of thought- thought either of the matter observed or of any other matter; observation not being mounted on the past but observation of the very moment of generation of anger, lust, greed, lethargy or jealousy and watching it till its end/culmination for no thought can fully be controlled/overpowered by another thought however powerful the latter may be.

Practising kriya regularly with full devotion in Gurudev and Lahiri Mahasay and remaining in the parawastha of kriya- a state reachable only after deep and sincere practice of kriya not describable in words but only subject to realisation- and then doing all sundry works by remaining in that state of Kriya ki Parawastha- for all works done from that state are nishkam karma.

Being kind, loving and affectionate to everyone you meet; at the same time carrying the essential temperament for discharging your worldly duties either at the ground level or from some position of authority but never accumulating any malice deep down the heart with an intention to avenge or harm someone in future- that is MEJAJE THAKBE, MONE RAKBHE NA.

Never engaging in any sort of competition with anyone (especially kriyaban) for each one will get results according to his own actions; instead focussing only on one’s own actions and practising kriya consistently and faithfully to have the fruits of kriya; except in extraordinary/emergency circumstances kriya should be practised regularly two times a day as directed by Gurudev.

Not expecting anything from anyone- not even from someone whom you consider to be the closest- for no one on this earth is as close to you as you yourself are- but that understanding comes only after deep realization of the self- till then you may not expect anything from anyone be it physical, mental or financial.

Not simply believing in superstitions/dogmas/rituals for the sake of believing but always trying to understand the rationale behind the continuity of such belief systems and dropping them if felt unnecessary without making any fuss or engaging in any form of criticism/condemnation for Lahiri Mahasay and all illumined masters alike have always avoided criticism; in fact they have shown the right Path to the inquisitive seekers and we shall ever remain grateful to them by whose grace we are on this Path.

Not boasting of oneself by practising Kriya and claiming holier-than-thou as the same will definitely prevent you from delving deeper into this Path as the practice itself is not the Truth but the gateway to Truth and minimum pride in the practice itself will hinder you in realising the Truth; actually the whole gist of Kriya Yoga is stilling the mind/cessation of the mind by stilling the breath (YOGASCHITTWRITTINIRODAH: Patanjali Yogasutra 2)- that is making the body-mind the right vessel to receive the ultimate; only a subtle mind can delve deeper into revealing the Truth that can only be known and never be described.

If someone is wrong or appears to be incorrect in his justifications then always making/putting forth one’s points politely for bringing into picture his said mistakes but never criss-crossing him directly as it may hurt the person and prevent him from expressing himself further which may have something beneficial for all.

This creation/evolution is very beautiful/charming/lovable but the same can be realized only by remaining in the Parawastha of Kriya because then you will be able to visualize this whole creation coming out of nothingness and vanishing into nothingness and you as a particle of that creation has nothing much to do except discharging your worldly duties playfully and joyfully with no entanglements since all entanglements/identifications/attachments are your own self created images and not existential; however you will not remain oblivious of your duties since the very duty then will be joy.

Not showing off one’s wealth or knowledge for all acquired things are earthly and unreal; even those practising kriya should avoid discussing amongst themselves their experiences as their said experiences may be just mere hallucinations/imaginations and therefore influence others in a wrong way; all such experiences must be shared with Gurudev who only can tell whether such experiences are real or imaginary and accordingly guide such kriyabans in the right direction.

If for some actions committed in the past one feels guilty/embarrassed the same should never be discussed publicly nor should the doer condemn himself or repent for the same; at most the same may be shared with Gurudev and after deep observation the same may be forgone/dropped completely with the right understanding for it is never too late to correct oneself on this Path.

Though sincere kriyabans are always under the sight of Gurudev, visiting one’s Guru at his place or ashram will immensely help the kriyaban as the place where Gurudev stays has immense positive vibrations that will definitely benefit such kriyabans besides receiving blessings of Gurudev.

At no cost a householder shall sacrifice his worldly duties for advancing on this Path since his family members remain dependent on him; as such following the example of Yogiraj a sincere kriyaban must maintain a balance between his worldly duties and his duties towards himself that he comes to know after getting initiated into Kriya Yoga.

Women are embodiment of love and are Mother and as such they should be respected and adored by all; it is the duty of all householders especially the kriyabans to respect all women and regard them as their Mother, that is, have the same respect and love that they have for their own mothers.

Not accepting anything at face value but questioning all and sundry with reasoning and commonsense and finding solutions to such questions without bothering Gurudev; if one practises kriya faithfully he will get all the answers to his questions for all solutions lie hidden in the problems themselves- one just needs the clarity and understanding to notice them; reading lesser and lesser number of books and practising more and more kriya is a surer way to wisdom and Truth as all knowledge acquired from books is borrowed and never self realised and therefore never true; only a man having self realized knowledge is wise as he knows the Truth.

What more can I offer Thee than this body-mind

For the soul this disciple has not yet known

But by your grace is on the Path to know it

And the very day of its knowing/realisation

Shall his soul merge with Thee-

For you are the Truth- Infinite

That this disciple has come to know

And therefore prays at your lotus feet

To bless him for remaining blissful and playful ever

While performing all his tasks as a householder

That he has come out of nothing to vanish into nothing

But not before knowing himself as pure consciousness, pure love, pure joy

Which Thee my holy master you are

And therefore shall ultimately merge with Thee

Source: These words are the written and spoken by Shri Saket Shrivastava, living in West Bengal, on the occasion of Guru Purnima celebration in 2018.