Long ago, in a place called Bardi at Narayangunj situated in present Bangladesh, people suddenly noticed an almost mad stranger roaming around. He was only comfortable on the banks of river Meghna where he rested quietly. All the villagers and children considered him a mad person and used to disturb him. 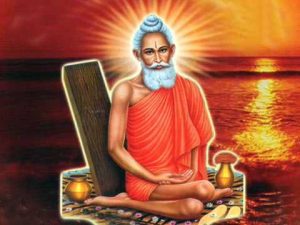 He was mostly naked. One day some Brahmins assembled at a nearby shop to make their “sacred thread” but it got entangled and puzzled to undo this huge knot. Suddenly the mad person appeared and asked the Brahmins “Don’t you know the technique to undo the knot”?

They were astonished but felt something different and replied “Yes, we know if there is any knot in the thread, by chanting the Gayatri mantra, it can be untangled”. The stranger asked “Then why don’t you do that”? The Brahmins replied“. We have tried but without any success. Well you can try once”. The stranger first touched the thread, chanted the Gayatri mantra and then he clapped loudly. Finally the knot was undone. This was Lokenath Brahmachari.

In the Bengali year 1138, Lokanath Brahmachari was born in Chakala near Barasat, in the district of North 24 Parganas of West Bengal, India. He was the fourth son of his parents – Ramkani and Kamola Ghosal.

During the sacred thread ceremony, his master Bhagoban Ganguli proposed that he would start “Prbajaya” with this young Brahmachari. Hearing this, Lokenath’s bosom friend Benimadhab Bandopadhyay wanted to come along as he didn’t want to be separated from his friend. So, Bhagaban Ganguli also gave Dikshya to his friend Benimadhab. All the villagers showered flowers at these two 9 year old boys who wandered out to an indefinite life with their master.

From Barasat they came to Kalighat which was very different from the to be Kolkata of today. The temple was located amidst forests on the river side. Kalighat was then visited by many powerful Sadhus, Kapaliks and Aghories. Lokenath and Benimadhab were too young to understand the austerity of Yoga and in boyish frolic would tug at the locks and loincloth of such sadhus and kapaliks.

Gurudev tried to convince the little Yogis not to do such activities. Gurudev always lovingly took care of them but never allowed them to be careless about their lessons. During one particular “Brata”, Gurudev forbade any bodily motion and himself cleaned their urine and feces. Acharya also begged food for them. This continued for 25 years. They kept moving to places including the Humalayas where one day they finally met a great Yogi, Hitalal Misra. Bhagaban Ganguli was too old and he handed over Lokenath & Benimadhab to Hitalal Misra for further severe Yogik practices. They both were 90 years old.
After long isolated practices in the Himalayas, Mahaguru Hitalal Misra told them that there were no further to accomplish.

After taking permission to leave, they reached Bangladesh through Kamakshya on the Eastern Himalays where Benimadhab separated from him. Lokenath’s complexion had turned snow-like due to meditation. Initially he resided under a tree at Daukandi in Tripura. Here, by touching the feet of Baba Lokenath & seeking his blessings, Vengu Karmakar, a local resident got relief from a complicated court case. He took him to his village at Bardi. There everyone from the Zamindar to the common man came to know about the spiritual powers of Baba Lokanath. However he was never close to anybody and by nature he was very rude but was very caring to the birds and animals. There are incidents about his love for snakes, tigers and wild boars.

Once, one of Lokenath’s disciple got in trouble with an indisciplined boy of Nag family, the local Zamindar. Lokenath was summoned by the Ld. court to appear as a witness. The Ld. Court asked him about his age to which he replied “hundred and fifty years”. The defence advocate ridiculed him “this is court and not a place for such joke”. Lokenath replied “then you may write whatever you may wish”.

Again he was asked “at this age, you must have lost your eye-sight, but in spite of that you are appearing here as a witness. In response Lokenath told them to go and check if any creature was climbing the mango tree outside the court building. The court personnel saw that Lokenath had rightly observed from the court-room the ants which were climbing the mango tree.

Bijoy Krishna Goswami once came to meet him at Bardi. Bijoy Krishna Goswami was then the Acharya of Dhaka Brahma Samaj. After this visit, their activities of spreading spirituality among people started gaining popularity. Lokenath used to tell his disciples about his steady meditation and strict devotion to God. We understand from his speeches that he travelled extensively in Himachal, snow covered regions of China, Middle East and several places in Europe. In China he was arrested, but when he was recognized as an Indian monk, he was immediately released.

He also visited Mecca Sharif as well where he met a four hundred years old fakir called Abdul Gafur. He often used to tell that he had travelled several places in the world but had never met a Brahmin superior to Troilongo Swami and Abdul Gafur. He used to treat urine as Yogabibhuti. His language was blunt but many people benefited from him.

While in America, once an American lady came to Dr. Nisikanta Bosu, a relative of Nag Mahasay of Bardi, for treatment of her critical illness. She asked the doctor if he could get something from the Indian monks which could cure her disease. The doctor responded that he did not have any idea. Suddenly the lady asked “Who is the person standing behind you”? Then she showed him a medicine in her hand. After sometime when Dr. Nishikanta Bose come to India, he described the incident to the people of Bardi. The description of the lady was a very close description of Lokenath Baba.

On 18th Jaistha, 1297 of Bengali calendar, Baba Lokenath left his worldly life to join his heavenly adobe. Even after his death, he had once changed the order of death sentence of a prisoner by his divine power.